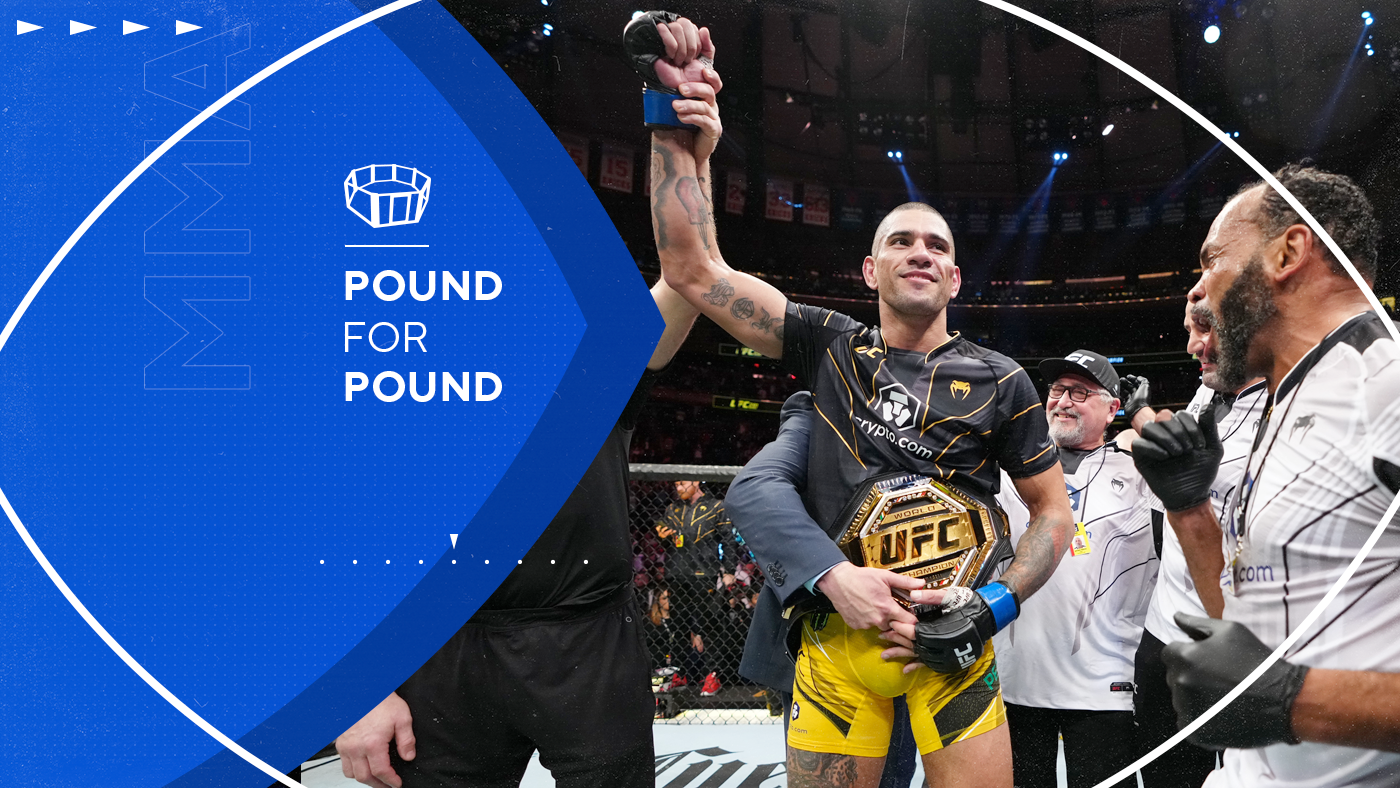 There’s an old saying in professional sports, popularized by former NBA coach Rudy Tomjanovich after his 1995 Houston Rockets made an unlikely run to consecutive titles, regarding why it can be dangerous to underestimate the heart of a champion.

Alex Pereira (7-1) may not have entered New York’s Madison Square Garden last weekend as a UFC champion, but the 35-year-old Brazilian slugger surely exited as one in just his fourth trip to the Octagon. Headlining UFC 281 opposite longtime rival Israel Adesanya, Pereira relied on so many of the traits he showed as a two-division Glory kickboxing champion to commandeer the 185-pound championship.

The stunning fifth-round knockout authored by Pereira seemed unlikely given that it was just his eighth pro MMA contest. Yet he carried the confidence of having twice defeated Adesanya in kickboxing, which included a late knockout in their 2017 rematch, all the while showcasing some serious pound-for-pound level traits.

Pereira relied on a steady diet of calf kicks, which ultimately immobilized Adesanya enough to keep him within punching range against the fence. He also quieted any concerns regarding whether he had built up the five-round stamina needed for the championship level by remaining dangerous even when down on all three scorecards at the time of the stoppage.

Can’t get enough boxing and MMA? Get the latest in the world of combat sports from two of the best in the business. Subscribe to Morning Kombat with Luke Thomas and Brian Campbell for the best analysis and in-depth news, including reaction to everything that went down at UFC 281 below.

While most will remember the brutality of his left hooks and right hands that led to Adesanya being stopped on his feet for his first UFC middleweight loss in 13 fights, Pereira was forced to lean much more on his poise and overall combat experience to get the nod.

Pereira may still be new to MMA but his upset victory became much less of a surprise when taken into account everything he has accomplished up to this point. His successful transition into a new combat sport is also another feather in the cap of former UFC light heavyweight champion Glover Teixeira, whose Connecticut gym — which also features striking coach Fernely Feliz Sr. — is slowly becoming a destination.

Using a criteria that takes into account everything from accomplishments to current form, let’s take a closer look at the top fighters inside the Octagon.

With respect to Jose Aldo, Volkanovski took one step closer to featherweight G.O.A.T. status by leaving former champion Max Holloway a bloody mess in their trilogy bout. With four title defenses, Volkanovski has made the division his own and will look to chase history in February by moving up to lightweight to challenge Islam Makhachev.

Usman looked on his way to a sixth title defense and a tie with Anderson Silva for consecutive UFC wins until a miraculous head-kick knockout from Leon Edwards in Round 5 shocked the world at UFC 278. An immediate trilogy bout appears like the next move for the 35-year-old who yielded the first takedown of his career in the opening round.

In the first UFC bout between fighters riding win streaks of 10 or more, Makhachev made his 11th win his most memorable one by dominating Charles Oliveira to start a new reign at 155 pounds. No longer can critics argue his level of competition. The more Makhachev steps outside of the large shadow cast by his head coach, Khabib Nurmagomedov, the world will see just how uniquely great Makhachev is.

Despite suffering a serious knee injury during training camp amid a very public contract battle with UFC brass, Ngannou gutted out a unification win against unbeaten interim champion, Ciryl Gane, in January. Ngannou’s UFC future will remain in question until he signs a new deal but a spring 2023 showdown with Jon Jones could help sweeten a potential deal.

Despite leading on all three scorecards in his UFC 281 title defense against long-time kickboxing rival Alex Pereira, Adesanya succumbed to a fifth-round stoppage for his first loss at middleweight inside the Octagon. An immediate rematch is likely despite the fact that Pereira now owns three victories over Adesanya across two combat sports.

One fight after shutting his critics up by outpointing Petr Yan in their title rematch, Sterling’s second title defense produced largely inconclusive results. While history will always show a second-round TKO win for Sterling against TJ Dillashaw, the former champion entered with a badly injured shoulder that was reaggravated seconds in.

At 35, making a late transition from kickboxing into MMA, it was hard to project just how good the Brazilian slugger might be. But just four fights into his UFC career, “Poaton” lived up to his “hands of stone” moniker by stopping middleweight king Israel Adesanya in Round 5 to capture the 185-pound crown in November.

It’s time to give the unpredictable Prochazka his full due after extending his win streak to 13 in a dramatic and savage fifth-round submission of Glover Teixeira at UFC 275. Prochazka is 23-1-1 since 2013, avenging his lone defeat by knockout. He has also shown an elite chin and will need to flash it once more in a rematch with Teixeira set for Dec. 10.

Was the Brazilian finish machine’s one-sided title loss to Islam Mahkachev the result of a bad stylistic matchup or did Oliveira’s reckless and dramatic ways finally catch up to him? Either way, the 33-year-old will be forced to regroup after a remarkable 11-fight win streak that won’t be forgotten anytime soon.

A true life “Rocky” story played out in front of the eyes of MMA fans when the often overlooked Edwards rallied to stop Kamaru Usman in dramatic fashion at UFC 278. Edwards extended his unbeaten streak to 11 fights since his 2015 defeat to Usman and could be in line to return home to the U.K. for an instant trilogy fight.

Nunes soundly outpointed a stubborn Julianna Pena at UFC 277 to regain her 135-pound title and remind everyone of her G.O.A.T. ways. The victory was also a big one considering Nunes, after leaving American Top Team, started her own gym and changed her style.

The combination of Nunes’ comeback win and Shevchenko struggling in a disputed decision against Taila Santos dropped the 125-pound champion from the top spot. She may get a shot at leaving no doubt for good, however, should UFC move forward with a trilogy fight against Nunes at bantamweight.

A baffling strategy of defensive circling led to Namajunas surrendering her 115-pound title to inaugural champion Carla Esparza in their May rematch. Namajunas was barely touched in her unanimous decision loss. An inevitable trilogy looms with new champion Zhang Weili, whom Namajunas has defeated twice.

The first Chinese-born UFC champion regained her 115-pound crown by dominating Carla Esparza at UFC 281 via second-round submission. The victory showcased Zhang’s continued improvement in her grappling game yet she won’t truly gain recognition as the best strawweight in the sport until she can avenge a pair of losses to Namajunas.

“The Venezuelan Vixen” still has much to prove regarding her standing as an elite fighter following a dominant title loss in her UFC 277 rematch with Amanda Nunes. Was Pena’s eight-month title reign following a monumental upset of Nunes in 2021 just a fluke or the announcement of more to come from the 33-year-old?

Jimmy Garoppolo does not need foot surgery, could reportedly return during playoffs

Gervonta Davis doesn’t expect to be in boxing too much longer: ‘Once I get them guys out of there, I’m gone’