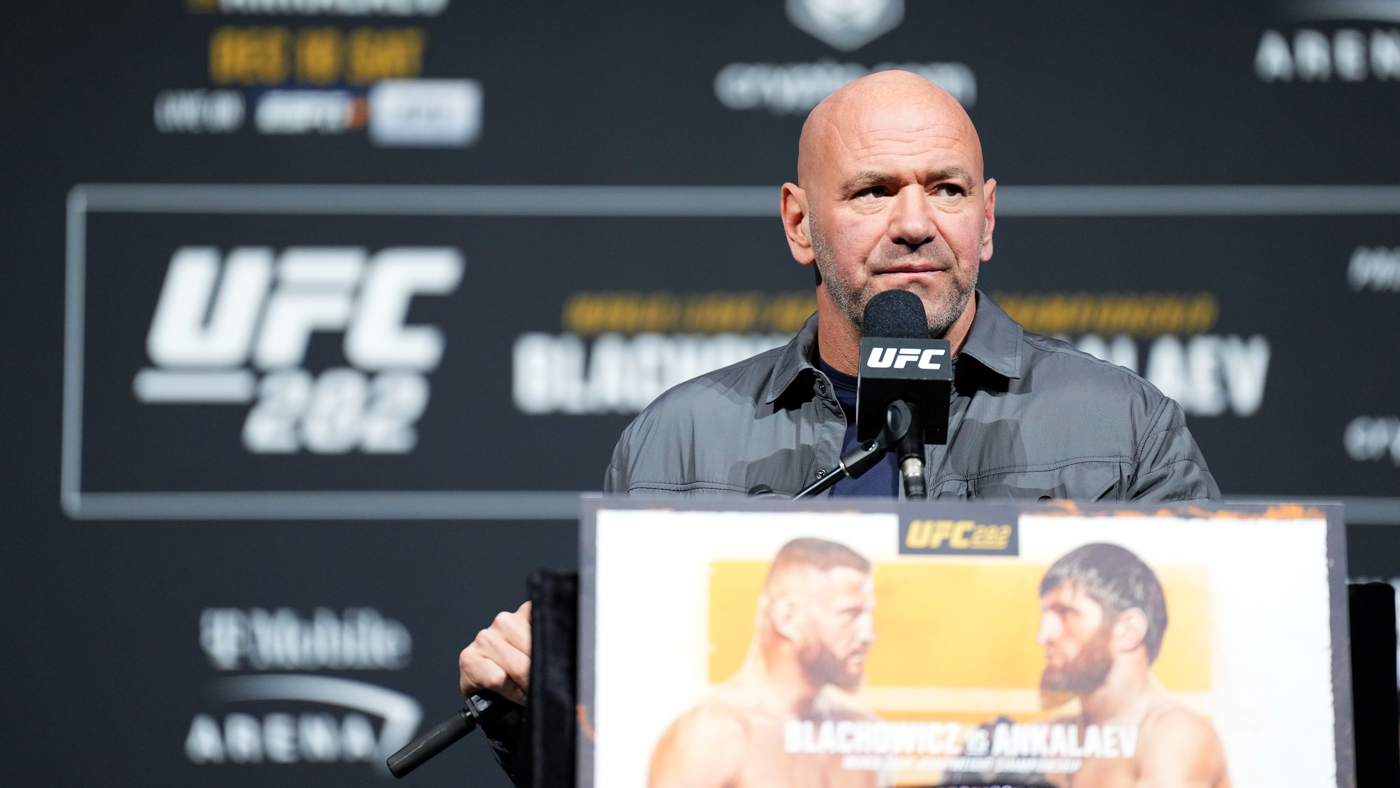 In an effort to put the focus back on his fighters entering the first UFC fight card of 2023 this weekend, embattled president Dana White addressed reporters at Wednesday’s UFC Fight Night media day in Las Vegas following a New Year’s Eve domestic dispute that was caught on camera.

White, 53, who had previously accepted blame during an interview with TMZ last week when video was released of him and his wife of 27 years, Anne, trading slaps at a nightclub in Mexico, brought an end to the much-criticized silence from UFC, parent company Endeavor and broadcasting partner ESPN in the aftermath of the incident.

“There are no excuses for it and it’s something that I am going to have to deal with and live with for the rest of my life,” White said. “One thing that I do want to clarify in this thing that I didn’t talk about on TMZ, because I didn’t expect it or see it coming, is the people that are defending me.

“There is never an excuse. There is no defense for this and people should not be defending me about this thing, no matter what. All of the criticism I have received this week is 100% warranted, and will receive in the future.”

White fielded questions for nearly 14 minutes with the MMA media, just days out from Saturday’s card at the UFC Apex, headlined by middleweights Nassourdine Imavov and Sean Strickland, who will fight at 205 pounds. The majority of talk, however, centered upon whether or not any repercussions were expected to be handed down to White, including those of the self-imposed variety.

“[If] I take 30 days off, how does that hurt me?” White said. “Me leaving hurts the company, hurts my employees and hurts the fighters. It doesn’t hurt me, I could’ve left [when UFC was sold] in 2016. Do I need to reflect? No, I don’t need to reflect.

“I’ve been against this, I’ve owned this. I’m telling you that I’m wrong. But listen, we have had plenty discussions internally — from [Endeavor CEO] Ari [Emmanuel], ESPN — no one is happy. Neither am I. But it happened and I have to deal with it.”

White, who was humble in both his tone and behavior, argued that no punishment for him is punishment enough.

“The punishment is that I did it and now I have to deal with it.”

Endeavor, which purchased UFC for over $4 billion from Zuffa in 2016, chose not to comment altogether. Meanwhile, White was regularly supported across social media by a legion of fans, fighters and even some media members, all of whom White spoke out against multiple times on Wednesday, reiterating that what he did doesn’t deserve any excuses, regardless of which spouse struck the other one first.

“There is only one side of this, it’s my side,” White said. “There is never a reason or excuse for what happened on New Year’s Eve to happen, period.”

Neither White nor his wife faced any legal charges stemming from the incident and both apologized to one other, per White. He also revealed their decision to stay together, turning their focus exclusively to repairing their family, which includes three teenage children.

“My kids know exactly who I am and they know exactly who their mother is and that’s what is important to us,” White said. “This is a personal family matter that played out in public and our biggest focus is our kids. You talk about being disappointed, who is going to be more disappointed than your kids in this scenario?”

The only fallout from the video came from TBS, which signed a deal to air White’s upstart Power Slap league, and the network’s decision to delay the launch of the slap-fighting promotion one week to Jan. 18, which White addressed briefly.

The media scrum ended with White asked whether UFC would change the way it deals with any future incidents involving fighters or employees who get charged for domestic violence, especially in the aftermath of the promotion’s decision not to suspend White.

“It all depends upon different situations but hopefully everybody sees what is going on with me and hopefully this doesn’t happen,” White said. “At the end of the day, we are all human beings and we all make mistakes. All you can do is try and recover from the mistakes you make in life. I don’t know. I’m sure it will be on a case-by-case basis. We have a lot of people around here who make a lot of mistakes and I’m one of them.”

Bellator 290: Fedor Emelianenko gets the rare chance at a storybook ending in final fight of legendary career

Kyrie Irving wouldn’t even accept a max contract from Nets at this point, per report

2023 NFL Draft: As Bears contemplate what to do with No. 1 overall selection, here’s the ideal scenario